We have built a simple climate model for online use, the Chalmers Climate Calculator. In the model the user can decide on when and how fast emissions of CO2 are reduced and what this emissions scenario implies in terms of CO2 concentration and global average surface temperature change. The climate sensitivity and the net aerosol forcing in year 2005 are also set by the user. Journalists, students, policy makers, and international negotiators, along with everyone else, can access the model at: www.chalmers.se/ee/ccc.

Example of questions that can be explored with the model:
•       What temperature increase will we see by 2100, if we keep global emission levels at the current level, or if we cut emissions by 3% annually, starting now?
•       What if we delay emission cuts for another 10, 20, or 30 years?
•       How much does climate sensitivity matter to global warming?
•       What if only developed nations cut emissions and developing nations don’t take any measures?
•       How much and how quickly do developed and developing nations, need to cut emissions, respectively, to stay below the 2-degree limit?
•       What role does deforestation play for atmospheric carbon dioxide levels and for temperature? How much will stopping deforestation matter to global warming?

Department of Energy and Environmnet

The National Snow & Ice Data Center (NSIDC) at the University of Colorado is an excellent resource for students to grapple with dynamic climate datasets. The most recent analysis of sea ice trends in the Arctic by the NSIDC is rather foreboding: 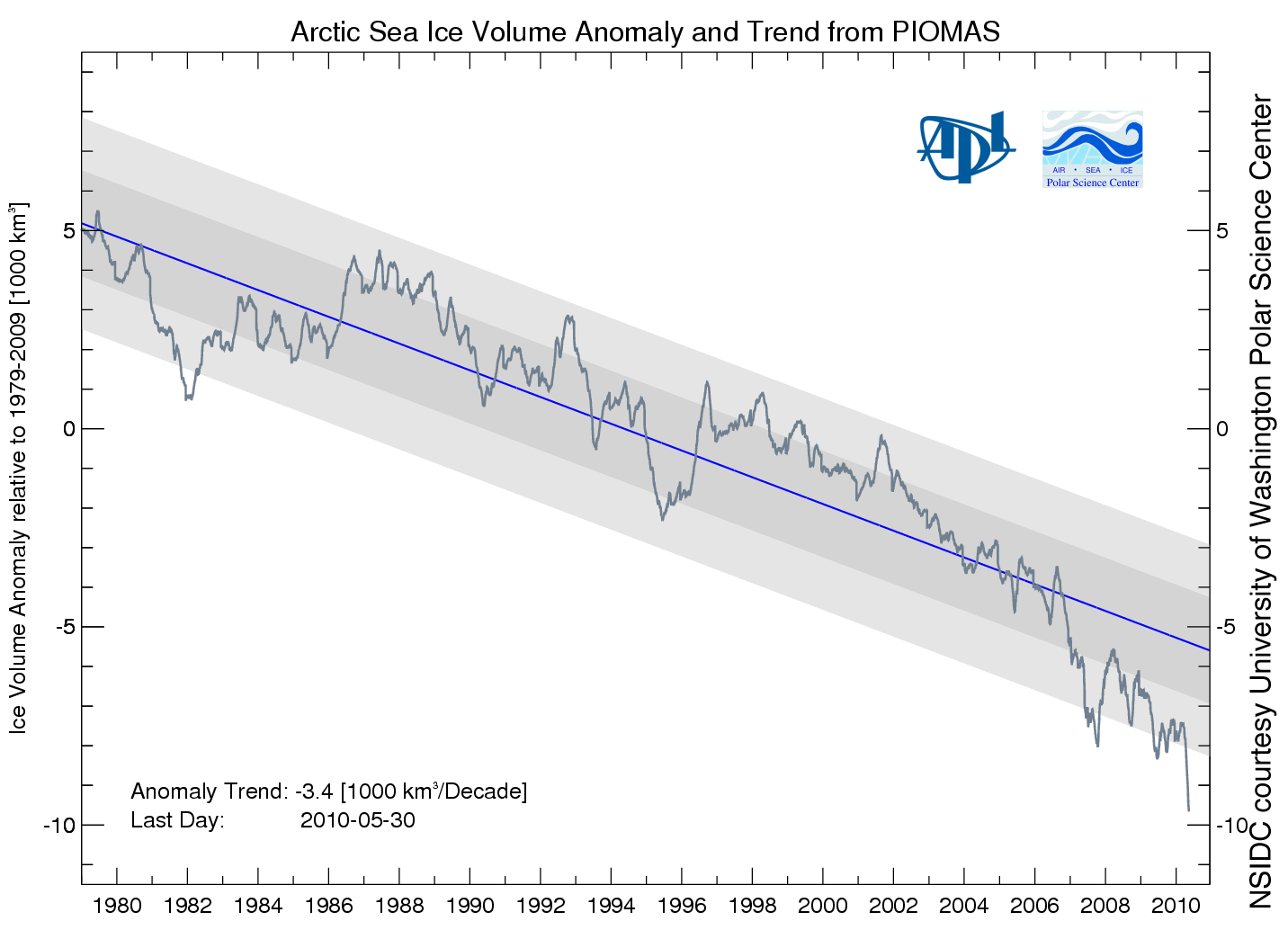 Cutting Edge Workshop: Teaching Climate Change from the Geologic Record
August 10-11, 2010 with optional field trip on August 12 at the University of Wyoming – Laramie

A large part of our understanding of past climate change is derived from the geologic record. Assemblages of pollen grains preserved in lake sediments, changes in soils through time, and the bones of now-extinct mammals all reveal information about ancient ecosystems and past climates. Climate change researchers recognize that these geological insights are critical for assessing the sensitivity of plants and animals to future climate changes.

In this workshop, we will introduce participants to an array of paleoclimate records and explain how they are collected, analyzed, and interpreted. The workshop will provide hands-on opportunities to examine fossils and use public-domain databases to develop classroom teaching exercises. It will also include an optional, one-day field trip to world-renowned archeological sites near Laramie, WY.

For more information visit the workshop website at http://serc.carleton.edu/NAGTWorkshops/climatechange10/index.html. The application deadline is June 30, 2010. The workshop fee is $70 for faculty and professionals and $25 for high school teachers, community college faculty and graduate students. This workshop will be held in conjunction with the AMQUA Biennial Meeting and is co-sponsored by the U.S. National Committee for the International Union for Quaternary Research and the American Quaternary Association.

I am delighted to announce that the inaugural issue of Washington and Lee University School of Law’s Journal of Energy, Climate Change and Environment, which focuses on Climate Policy for the Obama Administration, is now available on-line at http://law.wlu.edu/jece/page.asp?pageid=1082.  It features articles by Robin Craig, David Markell, J.B. Ruhl, Nathan Sayre, and Alexandra Khrebtukova on a wide range of timely topics.

For instructors of climate change courses who incorporate video presentations into the curriculum, I recommend the Climate Change library of United Nations University: http://videoportal.unu.edu/collection/climate-change.

The latest video in the collection, “Coping after Copenhagen: Maximimizing Mexico” is an excellent colloquium on contemporaneous negotiations.

There’s an interesting story in today’s Irish Times about how figures for forests sinks may be less than accurate:

EU MEMBER states and other developed countries have been accused of engaging in “creative accounting” to hide an estimated 400 million tonnes of carbon dioxide (CO2) emissions every year – in their trees.

Forests serve as “carbon sinks”, so countries are entitled to subtract the CO2 stored in trees from their total greenhouse gas emissions. But if the trees are cut down for use in making timber products, as the Swiss concede, they should then be treated as “debits”.

The push for a more liberal regime is being made by developed countries covered by the Kyoto Protocol, including Ireland. They have made it clear the use of almost unlimited forest offsets is the price to be paid for agreeing deeper cuts in their emissions.

Although the story doesn’t make it completely clear, I presume this row has broken out at the talks underway in Bonn right now.

This might be interesting to explore in a number of ways. How reliable are the figures used in multi-lateral environmental agreements, and how can these be verified? How can agreement be reached on these issues in a way that protects the environment, when governments are more focused on their short-term, selfish interests? And how can a good agreement be reached when it seems that the delegates get lost in the science and the statistics?

In 2009, Climate Lab launched http://climatelab.org, an interactive wiki website where users can collaboratively author and edit climate change information and media online.  To date the site has generated more than 250 original articles and over 350 registered users (and counting).

Building on the climate wiki, Climate Lab Networks enables partners to directly pull wiki information and media from climatelab.org into their own websites. Contributions and edits to climatelab.org are immediately available to partner sites connected to the network.  In that way, partners can contribute to building a common information resource while directly accessing and leveraging the collective knowledge, expertise, and efforts of the larger community to support their individual missions and campaigns.

Climate Lab Networks has been launched in collaboration with the Climate Institute and the Latin American and Caribbean Council on Renewable (LAC-CORE), our first NGO network partners.

… can now be accessed on our partners’ sites:

We are eager to build new partnerships using Climate Lab Networks.  For more information, I invite you to contact us and visit our website: http://climatelab.org/climate_lab/partnerships. A press release about the launch can be found on our blog: http://blog.climatelab.org/?p=611

FYI, for potential use by instructors who include simulations in their classes.

please have a look at our new climate business game CEO2 www.ceo2-game.com.

While politics and a lot of companies are losing precious time in climate protection, every user can now play the online-game CEO2 launched by financial service provider Allianz and WWF (World Wide Fund For Nature). One can slip into the role of a CEO and show which business strategies work out to reduce carbon, reduce risks and increase the long-term profitability. The aim of the game is to identify which investments at what time will set the course for a profitable growth in the low carbon economy of the future. CEO2 shows the possible impacts of business decisions in the chemical, automobile, utility and finance industry over the next 20 year. The success of the player is measured according to the development of the stock price and the carbon emissions.

Ahead of the UN-climate negotiations politics and business are hesitant when it comes to climate change. Although according to RECIPE (Report on Energy and Climate Policy in Europe) drawn up by the Potsdam Institute for climate impact research and supported by Allianz and WWF, Europe especially could profit from climate protection if it sets the framework for middle- and long-term reductions of greenhouse gas emissions.

After 2020 the window which is open for ambitious global CO2 reductions until 2050 will close entirely. The reductions are necessary to limit the temperature rise below 2 degrees Celsius compared to preindustrial levels and avoid dangerous consequences of climate change. A cost-optimal mitigation strategy for the transformation of the energy sector alone requires an increase of investments in low-emission technologies to an annual level of 400 to 1,000 billion USD by 2030, most of which would have to be provided by the financial markets and industry.

CEO2 has been developed by Allianz and WWF to show long-term connections of investment cycles and the remaining leeway for strategies and decisions in a playful way so that a broad public audience can access these issues. The game is available on www.ceo2-game.com for free. It has been developed and implemented by the Berlin communications agency LGM Interactive. The game is also promoted on facebook: http://apps.facebook.com/ceo_climate_quiz/.

In Stanley Kubrick’s 1964 film, Dr Strangelove was the unhinged US general who risked nuclear apocalypse by ordering a first strike against the Soviet Union. The character was modelled on Dr Edward Teller, “the father of the hydrogen bomb”. In the 1990s, Teller and his colleague at the Lawrence Livermore National Laboratory, Lowell Wood (a weapons researcher nicknamed “Dr Evil”), were among the first to advocate responding to global warming by transforming the chemical composition of the Earth’s atmosphere.

Taking control of the climate by injecting sulphur particles into the upper atmosphere sounds like science fiction, but there is now a powerful alliance of scientists and venture capitalists backing the idea. It’s endorsed by climate deniers in conservative think tanks, but the public remains mostly in the dark. This paper, by Clive Hamilton, explores the strange politics of geoengineering.

For instructors who include a geoengineering module in their courses, an excellent new article on one of the leading carbon dioxide removal (CDR) schemes, air capture, was published this week in Scientific American, Klaus L. Lackner, Washington Carbon out of the Air, Scientific American 66-71 (June 2010) (subscription required). Lackner, a professor of geophysics, at Columbia University is also co-founder of a company that is seeking to develop air capture technology. This article is appropriate for undergraduate, graduate and law students and provides a passionate, “birds eye” view of efforts to develop geoengineering technologies. It also focuses on a form of geoengineering that could pose far fewer risks of side effects than many of the others that have been discussed in this blog to date. It should be noted at the outset that Lackner himself argues that air capture doesn’t constitute “geoengineering” because “the process doesn’t change the natural dynamics of the earth or create a potential environmental risk.”  However, I subscribe to the National Academy of Science’s definition, which is “options that would involve large-scale engineering of our environment in order to combat or counteract the effects of changes in atmospheric chemistry.” One would be hard-pressed to argue that air capture would not fit under the rubric of this definition” given its potential for removing huge amounts of carbon dioxide from the atmosphere and the potential impacts on warming.

Among the take-aways from the article:

1. Could air capture technologies result in a moral hazard problem, i.e. divert efforts to reduce carbon dioxide emissions by mitigation approaches.If the technology proved to be effect, would that be problematic?

2. What are the opportunity costs, if any, in pursuing this technological approach vis-a-vis mitigation and adaptation responses?;

3. Is there a possibility that some countries would object to reducing atmospheric levels of carbon dioxide? If yes, what would the implications be for governance?