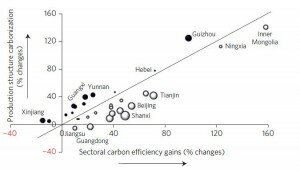 Some commentators have taken comfort in China’s pledge under the Copenhagen Accord to reduce its carbon intensity (the quantity of GHG emissions in relation to the economic output of a country) by 40-45% from 2005 levels by 2020, as well as the 17% emissions intensity reduction target set in its 12th Five Year Plan (2010-2015).  However, a new study published in the journal Nature Climate Change suggests that China may struggle to meet these goals, palpably demonstrated by the 3% rise in carbon intensity between 2002-2009. As the study’s authors conclude,  Chinese policy may be “leading away from its ambitious carbon intensity improvement goals.”

The study, which focuses on the period of 2002-2009, utilized a decomposition technique to assess the significance of two factors that can drive carbon intensity changes: efficiency improvements within sectors and production structure changes.

This could be a good reading to assign for a module on medium and long-term climate policy making. Among the questions it could generate are the following: